On New Year’s Day 1944, the two most famous Englishmen of their day drove north toward the Atlas Mountains from Marrakech, Morocco, for a picnic. Winston Churchill considered Marrakech “the most lovely place in the world” and wanted to share with Gen. Bernard Montgomery, late of the legendary Eighth Army, the breathtaking vistas of snowcapped mountains, azure skies, and bloated clouds that Churchill himself had often tried to capture on canvas. It was, Churchill wrote, “an oasis in the vast desert of human conflict,” and after lunch near a “dazzling stream in fresh air and brilliant sunshine,” the troupe pushed up into the hills. Recovering from a bout of pneumonia that had almost killed him, Churchill remained car-bound, but Monty, he recalled, “leaped about the rocks like an antelope.”

Churchill had summoned Montgomery to Marrakech to critique Morgan’s OVERLORD plan for the Normandy invasion. On his way to London as Eisenhower’s senior ground commander, Monty had never before read Morgan’s blueprint, and since he would bear much of the responsibility for its success, his opinion assuredly mattered. That opinion, Churchill remembered, was negative: “This will not do,” the general insisted. “I must have more in the initial punch.” 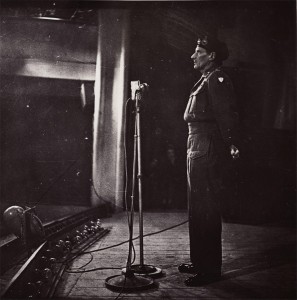 Gen. Bernard Montgomery bids farewell to his Eighth Army staff in Italy on December 30, 1943. The following day he flew to Marrakech, Morocco, to discuss with Prime Minister Churchill the new plan for the invasion of northwest Europe, known as Operation OVERLORD.

On January 3, 1944, in the same St. Paul’s School auditorium in London where The Guns at Last Light would open on May 15, 1944, Monty presided over a pivotal meeting attended by Morgan’s COSSAC staff. According to Maj. Gen. Ray Barker, Morgan’s chief American deputy: “[Monty] spoke as a god from Olympus. . . . In grandiose style, he said the plan was too restricted. . . . It was quite clear that Monty was the ground commander; [he] was entirely within his rights.” A week later, Monty cabled Eisenhower, still on a visit to the States: “In my opinion it is highly desirable that the extent of the initial assault area should be widened and that five divisions [as opposed to COSSAC’s three] should be put on the shore on the first tide. . . . Time is very short. Will you hurl yourself into the contest and what we want, get for us?”

Ike did precisely that. Upon his return to Britain in mid-January, he notified General Marshall: “There is a very deep conviction here, in all circles, that we are approaching a tremendous crisis with stakes incalculable. . . . Altogether we need five divisions assault loaded. This means additional assets in several lines but chiefly naval, with special emphasis on landing craft.” The revised plan forged by Ike and Monty broadened the invasion front from twenty-five miles to fifty; added two new invasion beaches, Utah on the west flank, Sword on the east; and enhanced the role of airborne troops by a factor of four.

No Allied commander denied that such a dramatic increase in men, ships, and planes would improve OVERLORD’s chance of success; the overriding predicament was where additional assets would come from and whether the invasion must be delayed to obtain them. Troops were not the trouble: the Americans had a profusion of men and could readily supplement the proposed Allied order of battle. Rather, the Allies obviously lacked adequate numbers of landing craft and air transports to fulfill the boosted OVERLORD plan. When Ike’s frazzled logisticians put their minds to the problem, however, they determined that delaying the invasion by thirty days from early May would—just barely—enable sufficient matériel, including landing vessels and aircraft fresh from assembly lines in the United States, to be shifted to Britain to carry out the invasion in the first week of June.

Such a delay would surely annoy Stalin, to whom at the November 1943 Tehran summit FDR and Churchill had promised an early May invasion. Even worse, a postponement would leave hordes of Allied troops in Britain inactive for yet another month, regrettably during a period of good campaigning weather. But Monty and all other senior commanders with amphibious experience in the Mediterranean had agreed that those unfortunate developments must be accepted to ensure victory on D-Day, the western Allies’ most crucial operation of World War II. So it must be June 1, or as soon thereafter as possible, depending on when lunar and tidal conditions would favor the airborne and amphibious assault.

Morgan’s “displaced strategists,” as Monty sarcastically labeled them, loudly complained that their COSSAC plan would have differed little from Montgomery’s had they possessed clout in the highest reaches of Allied political and military circles to demand more resources. But as Monty’s astute chief of staff, Francis de Guingand, later remarked, Monty was “a commander who could bang the table and say what he wanted.” Even better—he could get it. 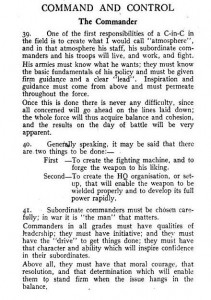 A page from a booklet written by Monty in June 1945 titled High Command in War. In the section labeled “The Commander,” Monty notes that generals “must have that moral courage, that resolution, and that determination which will enable them to stand firm when the issue hangs in the balance” (29th Infantry Division Archives).