For four months Eisenhower had focused his undivided attention on OVERLORD, but as of May 8, 1944, he had yet to issue the fundamental order that every Allied serviceman in Britain needed to know: When would the invasion take place? “No single question had been discussed more often,” noted a U.S. Navy OVERLORD study, but at a May 8 SHAEF meeting, Ike resolved to answer that question once and for all. Since January, when Roosevelt, Churchill, and the Combined Chiefs of Staff had agreed, at Montgomery’s insistence, to delay OVERLORD by a month, SHAEF had designated June 1, 1944, as “Y-Day,” code-named HALCYON; as of that date, Ike ordered, all air, land, and naval forces must be ready to execute their OVERLORD mission. However, before Eisenhower selected the invasion date and time, designated in OVERLORD orders as “D-Day” and “H-Hour,” he needed to hear his subordinates’ opinions on how Normandy’s tides—among the most spectacular in the world—and lunar conditions would influence their plans.

Ike’s airmen professed a straightforward requirement: given the hazards of flying thousands of aircraft along highly constricted flight paths in darkness, a full moon would help prevent midair collisions and ease nighttime navigation. The first full moon after Y-Day would occur on June 6 at precisely 6:58 P.M.; the near-full moon on June 5 or 7, the airmen declared, would also do. An invasion date before June 5 or after June 7, however, would make nocturnal flying much more challenging. Ike’s seamen, too, averred that OVERLORD’s convoys must make the perilous English Channel crossing at night to minimize the threat of German air attack. Many ground soldiers took that argument one step further by favoring a seaborne invasion in darkness, but SHAEF’s air and naval staffs vetoed that idea: the preinvasion air and naval bombardment would require at least minimal sunlight to neutralize the enemy’s many formidable coastal strongpoints, as bombers and warships could not hit with precision what they could not see. Finally, all of Ike’s senior commanders concurred that the seaborne assault must begin as early in the day as possible, maximizing the number of troops poured ashore by sunset in anticipation of the German counterattacks that would surely materialize within twenty-four hours of D-Day. That requirement, however, would severely curtail the window of time bombers and warships would have to saturate the beaches with bombs and shells before first-wave troops surged ashore. 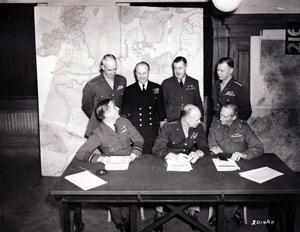 So far so good. But only a month in the past, the Germans had thrown the proverbial monkey wrench into the well-oiled machinery of Operation OVERLORD when Ike’s subordinates informed their anxious supreme commander that, thanks to Rommel, the enemy was in the process of cramming thousands of primitive but deadly obstacles onto all five of the Allies’ invasion beaches. The SHAEF staff drew the depressing conclusion that launching the initial waves of assault troops at any time other than a low tide would cause considerable numbers of landing craft to impale themselves on submerged enemy obstacles, many of which were mined. The initial landings must therefore be made at or near low water, when the obstacles were exposed on dry sand, allowing demolition engineers time to blow gaps in the obstacle belts before the onrushing tide submerged them. That prerequisite, unfortunately, would force heavily laden first-wave troops to traverse open beaches, in some cases nearly a quarter of a mile wide, and if the air and naval bombardment failed to suppress the enemy completely, the first boatloads of assault troops could be decimated. To complicate matters further, Ike’s naval staff insisted that the invasion must begin on a rising tide; otherwise landing craft could be stranded like beached whales after depositing their troops ashore as the tide fell with its astonishing rapidity.

No wonder Ike chain-smoked. OVERLORD planners pored over Normandy’s tide tables, searching for days in early June at which low, rising tides on the five invasion beaches would come at or close to sunrise. “The earliest acceptable dates for the assault from the naval point of view,” noted Adm. Sir Bertram Ramsay, Ike’s senior sailor, “were June 5 and 6; June 7 could be accepted in case of extreme necessity.” The next time favorable conditions would be in effect would be June 19 and 20, but unlike early June, moonlight would then be nonexistent. Ike promptly polled his subordinates and finally, on May 17, released his momentous decision: OVERLORD would be launched on Y+4, June 5. Due to variations in tidal and offshore conditions, Ike approved different H-Hours on the landing beaches: 0600 at Utah; 0610 at Omaha; 0645 at Gold and Sword; 0655 at Juno. Sunrise would be at 0559; the moon would be just thirty-six hours short of full; low water would be at about 0445; and the tide would be rising: just what Ike’s commanders had asked for. Shortly before midnight on May 25, 1944, SHAEF issued its fateful order: “Execute Operation Overlord,” with D-Day set for June 5.

Those best-laid plans were of course laid low by the violent storm that blew in from the west on June 4, forcing Eisenhower to postpone the June 5 invasion. Assuming the weather abated, D-Day would have to be June 6. Early on June 5, when SHAEF’s overworked meteorologist assured the high command that the storm would in all probability abate by June 6, Ike set in motion the events that would change the world: “Okay, we’ll go.” 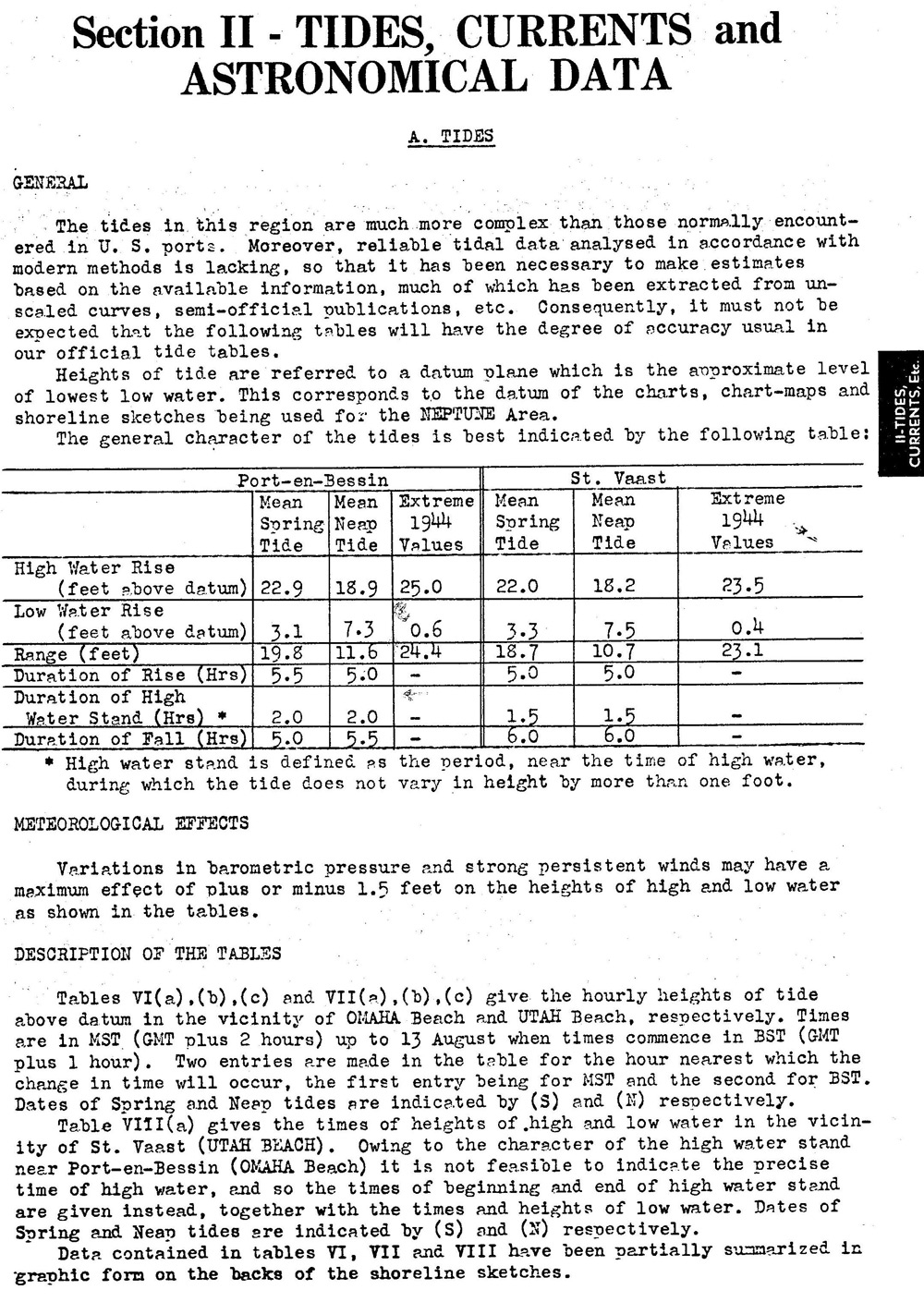 A page from a top secret Bigot study on Normandy “Tides, Currents, and Astronomical Data.” The very first sentence notes one of the Allies’ biggest challenges: “The tides in this region are much more complex than those normally encountered in U.S. ports.” As the document indicates, under some conditions water could rise by more than twenty-four feet in just a few hours. (29th Infantry Division Archives)