On page 191 of The Guns at Last Light, Rick Atkinson depicted the August 5, 1944, death of Rear Adm. Don Pardee Moon aboard his flagship Bayfield in Naples harbor. A steward “found the admiral, dressed in shorts and undershirt, sitting on the sofa with a .45 in his right hand, his eyes open, and a red worm of blood trickling from his ear. The spent bullet was found in the shower.” Moon’s suicide note pleaded, “The mind is gone…. I am sick, so sick.”

Just two months before, Moon had held command of Force U, designated in OVERLORD plans to convey the U.S. Army’s VII Corps across the Channel to Utah Beach on D-Day. It was an oppressive responsibility: Force U had been a late addition to the D-Day repertoire, brought into existence by Montgomery’s January 1944 OVERLORD revision, and Moon had little time to concoct a feasible invasion plan. A dress rehearsal for the Utah landing known as Exercise TIGER, scheduled from April 22 to April 30, 1944, would test whether the mountains of paperwork churned out in short order by Moon’s staff amounted to a viable operation of war.

For TIGER’s first five days, VII Corps troops led by Maj. Gen. Joe Collins marched out of their Devon bivouacs, assembled in coastal marshaling areas, and boarded transports crammed into West Country ports, notably Plymouth, Dartmouth, Portland, and Poole. Moon’s ordeal would emerge later, when his ships put out to sea, maneuvered in Lyme Bay, and on April 27 commenced the practice landings of the 4th Infantry Division on a picturesque Devon beach known as Slapton Sands, followed by waves of VII Corps support troops over the next three days. 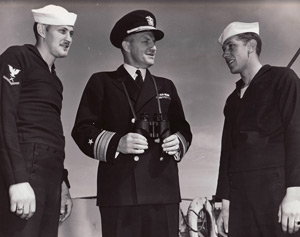 Eisenhower observed the initial April 27 landings from an offshore LCI (landing craft, infantry). December 1943 orders by British magistrates had evacuated all civilians from seaside parishes in the Slapton area, and Ike watched ships and planes saturate the coastline with live ammunition. Despite the impressive firepower display, the usual muddles triggered by such a complex military operation caused one of Ike’s aides to confess, “I came away from the exercise feeling depressed.”

The events unfolding that night over a half-hour period, however, were immeasurably more depressing. At 2 A.M. on April 28, a line-ahead formation of eight U.S. Navy LSTs, designated Convoy T-4 and packed with troops scheduled to land on Slapton Sands in a few hours, came under attack from a dozen German Schnellboote, known to the Allies as E-boats. Roaring out of the inky gloom, the Germans launched torpedo salvos and fired bursts from their 20-millimeter cannon at point-blank range. They could hardly miss; within minutes, hits crippled three LSTs, two of which sank. The survivors, many shouting, “We’re gonna die!” were deposited in frigid waters, and due to the lack of life rafts, their death prophecies soon came true. The convoy’s only escort, the Royal Navy corvette Azalea, did not fire a shot in response; moving at only one-third the speed of the forty-four-knot Schnellboote, the enemy had disappeared by the time Azalea reached the flaming LSTs.

The loss of three LSTs was bad enough—Ike’s chief of staff, Lt. Gen. Walter Bedell Smith, reported gloomily to his boss “that this reduced our reserve of LSTs for the big show to zero.” Much more alarming, however, was the loss of life, estimated initially at between 300 and 400, but growing eventually to about 650—roughly two-thirds from the Army, one-third from the Navy. Hundreds more survivors suffered from hypothermia or burns. Two VII Corps service units, populated by men who never expected a close-up encounter with the enemy, nearly ceased to exist: the 557th Quartermaster Railhead Company and the 3206th Quartermaster Service Company.

The following day, Moon climbed aboard U.S.S. Augusta, the flagship of his boss, Rear Adm. Alan Kirk, to attempt an explanation for the unmitigated disaster that had just befallen Force U. Moon and a staff officer, Capt. John Moreno, entered the cabin of Rear Adm. Arthur Struble, Kirk’s chief of staff. Noting a British submarine passing Augusta after a successful patrol, Struble hissed, “Well, I see somebody did his duty.” Moreno recalled that Struble thereupon turned on Moon with “the coldest glance I’ve ever seen . . . [and] brutally snarled, ‘All right, Moon, tell me what happened.’” According to Moreno: “I think that is when Moon really broke down.”

Among the many lessons the distraught Admiral Moon learned in that tragic affair, two stood out: first, the Germans must never—never—be underestimated; second, in OVERLORD’s opening phase, all participating servicemen, be they robust, fervent youngsters or corpulent, overage rear-echelon men, would face mortal danger equally, every minute of the invasion.

No one ever said D-Day would be easy. 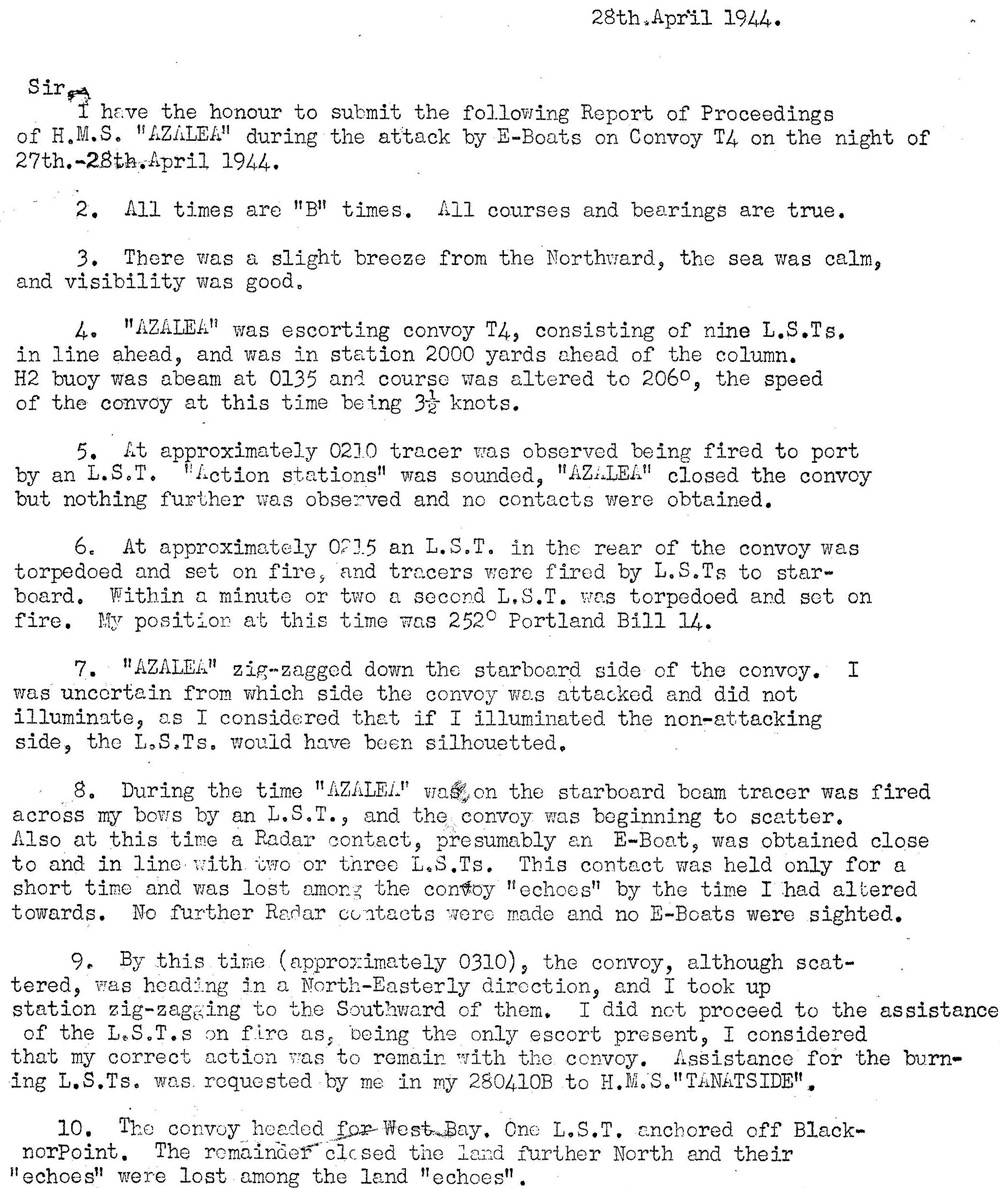 )The report written by the Royal Navy’s Lt. Cdr. G. C. Giddes, commander of H.M.S. Azalea, on April 28, 1944, the day after convoy T-4 was attacked during Exercise TIGER. Giddes notes that at 0215, “an LST in the rear of the convoy was torpedoed and set on fire.” At that time the LSTs were moving at only three and a half knots. (U.S. National Archives)