“THE MOST GLORIOUS EPISODE IN OUR HISTORY”

The D-Day Airborne Mission
by Joseph Balkoski
Posted May 13, 2014

Nothing like it had ever been attempted. Nevertheless, in Operation OVERLORD the Allies intended to try a multifaceted airborne mission on such a colossal scale that it would, they hoped, negate the oppressive disadvantages faced by seaborne troops forced to execute a frontal assault against a heavily defended coastline. The U.S. Army’s leading soldier, Gen. George Marshall, had clamored for operations of that kind—he called them “vertical envelopment”—to take advantage of the impressive surge in size and skill of Allied airborne forces since their tentative and admittedly defective operations in the Mediterranean in 1942 and 1943. True, Eisenhower’s senior airman, Air Chief Marshal Trafford Leigh-Mallory, harbored doubts that airborne warfare against an enemy as implacable as the Germans could ever rise to such a grandiose level. But Ike’s young Turks affirmed that limited, pinprick airborne operations were things of the past: using robust airborne units in small-scale missions, the 82nd Airborne’s brigadier general, Jim Gavin, snickered, “is like having Michelangelo paint a barn.”

An abundance of men and airplanes alone could not guarantee D-Day success; the Allies must also forge fresh ideas, based not only on past airborne experience but on their renowned cutting-edge technology. Moreover, ample time must be provided prior to the invasion for troops and aircrews to practice. And practice they did, like they had never done before, so rigorously from March to May 1944 that one confident American C-47 pilot, 1st Lt. Adam Parsons—a former paratrooper—averred with understandable ardor, “Every pilot in IX Troop Carrier Command on D-Day was well qualified.” On March 23, Troop Carrier’s 53rd Wing made a practice drop of 101st Airborne paratroopers that an Air Force historical study defined as “spectacularly good”; more important, it accomplished that feat with Eisenhower and Churchill as witnesses, two men whose faith in airborne prowess assuredly needed boosting. Seven weeks later Troop Carrier carried out a highly successful nocturnal dress rehearsal, Exercise EAGLE, involving over one thousand C-47s and gliders flying dogleg routes in tight formations over southwestern England, roughly similar to flight patterns they would follow on D-Day, to drop zones on Salisbury Plain. “The effect of Eagle,” the Air Force study concluded, “was to induce a mood of optimism as far as Troop Carrier capabilities were concerned.” 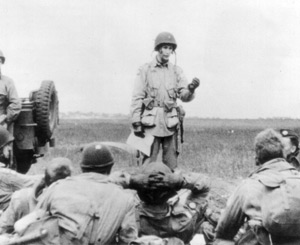 Brig. Gen. James Gavin of the 82nd Airborne Division addresses his troops during 1944 training in England. Gavin noted that the D-Day airborne operation “will be the most glorious or spectacular episode in our history, or it will be another Little Big Horn.” (29th Infantry Division Archives)

That optimism was based on the Allies’ enhanced aptitude to put glidermen and paratroopers on the ground behind enemy lines reasonably close to their targets, a skill that had been shockingly deficient in Mediterranean operations. By spring 1944, advanced technology, such as “Gee” radio navigation and the SCR-717 air-to-surface microwave radar set, enabled navigators not only to fix their position accurately during flight but also allowed them to distinguish terrain features using onboard scopes, even through clouds or at night. Even better, Anglo-American airborne units enthusiastically adopted “pathfinder” techniques, thoroughly training volunteer paratroopers to drop behind German lines immediately prior to the invasion and deploy bright holophane lights and 28-pound “Eureka” transmitters to delineate drop zones for oncoming serials of aircraft packed with paratroopers. As the main aircraft serials approached, onboard “Rebecca” receivers set to prearranged frequencies picked up Eureka transmissions from their assigned drop zone, which was also illuminated by colored lights—one of which flashed in Morse code the drop zone’s code letter as specified in invasion plans. Pathfinders could only fulfill their arduous jobs if pilots deposited them on target; hence, pathfinder pilots endured particularly scrupulous training. At the American pathfinder school at North Witham, Lincolnshire, the commanding officer offered a monetary reward and a forty-eight-hour London pass to the crew that achieved the most accurate drop in each practice mission.

The enemy’s redoubtable military skill assured that not everything would go according to plan. To maximize surprise and lessen the effect of the Germans’ impressive array of flak guns in Normandy, Allied planners agreed that the D-Day airborne assault must be carried out at night. But that necessity could trigger dozens of fatal midair collisions in the wingtip-to-wingtip formations required for tight, accurate drops. Airborne commanders therefore advised Ike that a full moon, or close to it, would dramatically improve the mission’s chance of success and could save hundreds of lives. A nocturnal operation, however, cast the airborne’s glider component into a subsidiary role, since nighttime glider landings, particularly in Normandy’s constricted bocage country, would be excessively hazardous: Leigh-Mallory predicted a 70 percent loss rate. Paratroopers, who at one time were heavily outnumbered by glidermen in American airborne divisions, would carry the burden in the initial attack; glider missions—aside from the British plan to seize the Orne and Orne Canal bridges with glider-borne troops—would be limited to the hours near dawn or dusk.

Could the audacious airborne mission succeed on D-Day? Ike’s high blood pressure and chain smoking worsened when he contemplated what would happen if it did not. As Gavin noted in late May, the operation “will be the most glorious or spectacular episode in our history, or it will be another Little Big Horn.” 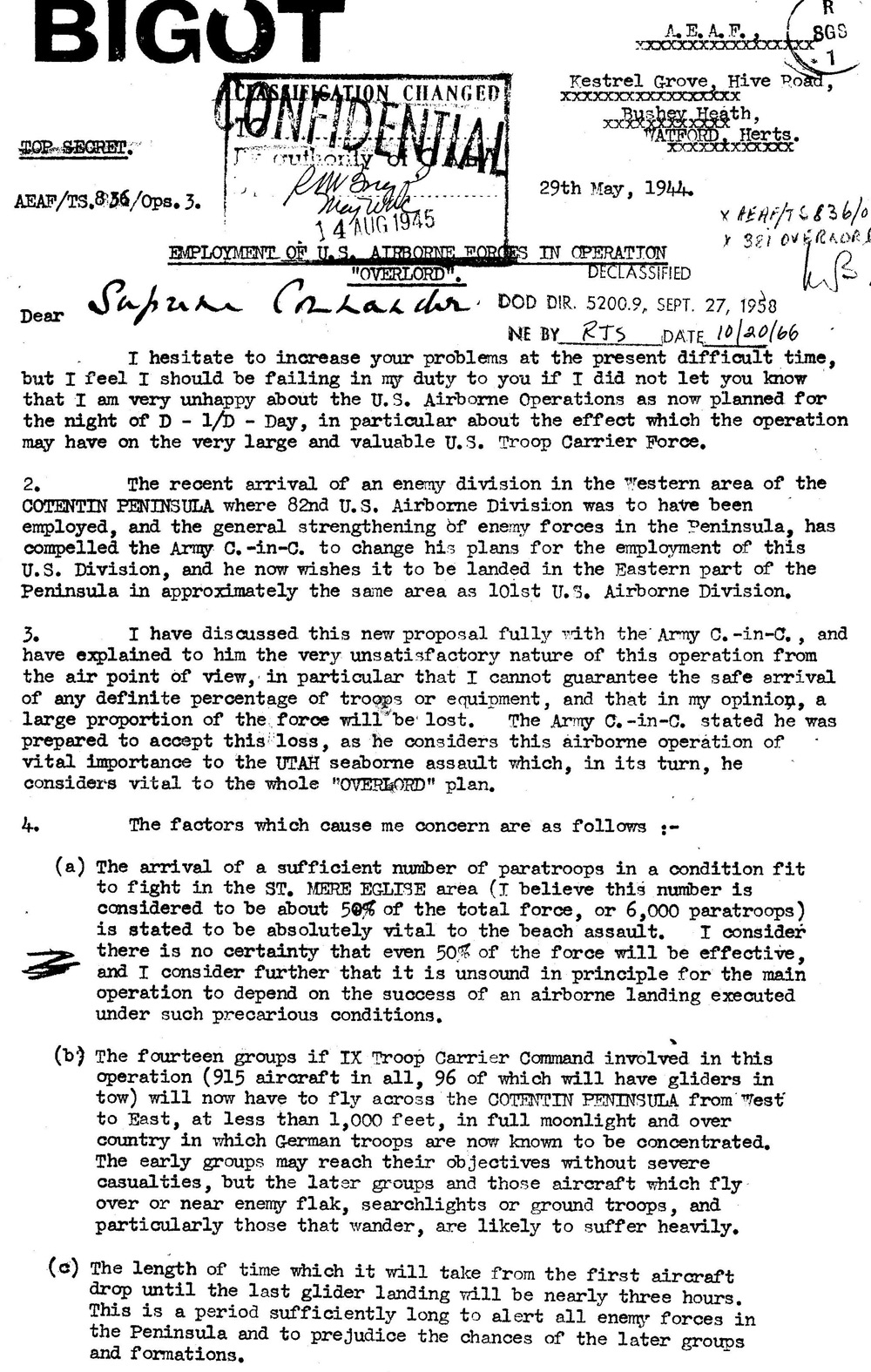 Air Chief Marshal Leigh-Mallory’s May 29, 1944, letter to Ike, in which he states, “I am very unhappy about the U.S. airborne operations as now planned for the night of D-minus-1 and D-Day.” (29th Infantry Division Archives)