Reviews for An Army at Dawn

“A splendid book . . . The emphasis throughout is on the human drama of men at war.”
—The Washington Post Book World

“A master of the telling profile . . . This vivid, personality-driven account of the campaign to drive Axis forces from North Africa shows the political side of waging war, even at the tactical level.”
—Chicago Tribune

“Brilliant . . . This is history and war in the hands of a gifted and unflinching writer.”
—Kansas City Star

“A monumental history of the overshadowed combat in North Africa during World War II that brings soldiers, generals, and bloody battles alive through masterful storytelling.”
—citation for the 2003 Pulitzer Prize for History

“A book that stands shoulder to shoulder with the other major books about the war, such as the fine writing of Cornelius Ryan and John Keegan.”
—Associated Press

“Atkinson’s writing is lucid, vivid . . . Among the many pleasures of An Army at Dawn are the carefully placed details—shells that whistle into the water with a smoky hiss; a colonel with ‘slicked hair and a wolfish mustache’; a man dying before he can fire the pistols strapped in his holster.”
—Milwaukee Journal Sentinel

“One of the most compelling pieces of military history I’ve ever read, An Army at Dawn will become a military history and strategy studies classic. Atkinson writes with incredible insight and mastery of the details, and he is always mindful of the larger picture. He goes from the highest political levels to the deepest foxhole without missing a beat. This is history at its finest.”
—General Wesley K. Clark, U.S.A. (ret.), former NATO supreme commander

“An engrossing narrative . . . Atkinson has an impressive command of words, a flair for simplifying complex issues, and a vast reservoir of information . . . This is a fascinating work which any reader can enjoy, and professional historians will find perusal of it eminently worth their while.”
—Arthur L. Funk, Journal of Military History

“A masterpiece. Rick Atkinson strikes the right balance between minor tactical engagements and high strategic direction, and he brings soldiers at every level to life, from private to general. An Army at Dawn is history with a soldier’s face.”
—General Gordon R. Sullivan, U.S.A. (ret.), former Army chief of staff

“What distinguishes his narrative is the way he fuses the generals’ war . . . with the experience of front-line combat soldiers.”
—Raleigh News & Observer

“Atkinson’s book is eminently friendly and readable, but without compromising normal standards of accuracy and objectivity. More than a military history, it is a social and psychological inquiry as well. His account of the Kasserine Pass disaster alone is worth the price of the book and stands as an exciting preview of the rich volumes to come. I heartily recommend this human, sensitive, unpretentious work.”
—Paul Fussell, author of Doing Battle and Wartime

“Rick Atkinson’s An Army at Dawn is a superb account of the Allied invasion of North Africa. From the foxhole to Eisenhower’s supreme headquarters, Atkinson has captured the essence of war in one of the most neglected campaigns of World War II.”
—Carlo D’Este, author of Patton and Eisenhower

“Given his success with modern military history, the penetrating historical insights Atkinson brings to bear on America’s 1942-43 invasion of the North African coast are not surprising . . . The most thorough and satisfying history yet of the campaigns in North Africa.”
—Kirkus Reviews (starred review)

“This is a wonderful book—popular history at its best. It is impressively researched and superbly written, and it brings to life in full detail one of the vitally important but relatively “forgotten” campaigns of World War II. What Bruce Catton and Shelby Foote did for the Civil War in their trilogies, Rick Atkinson is doing for World War II in the European Theater.”
—Professor Mark A. Stoler, author of Allies and Adversaries

“Atkinson’s book puts him on a fast track toward becoming one of our most ambitious and distinguished military chroniclers . . . [He] has unpacked facts that will lift many eyebrows.”
—Bookpage

“For sheer drama, the Tunisian campaign far overshadowed any other phase of the Second World War. Rick Atkinson has told the story with zest and brutal realism. His account will be a monument among accounts of World War II.”
—John S. D. Eisenhower, author of Allies and The Bitter Woods

“An Army at Dawn is an absolute masterpiece. Atkinson conveys both the human drama and historical significance of this campaign with a power and intensity that is nothing short of electrifying. This book is storytelling—and history—at its most riveting.”
—Andrew Carroll, editor of War Letters: Extraordinary Correspondence from American Wars

“Rick Atkinson has done a beautiful job of research and writing in An Army at Dawn. This is the North African campaign—warts, snafus, feuding allies, incompetents, barely competents—unvarnished. It whets my appetite for the rest of the Liberation Trilogy Atkinson has promised us.”
—Joseph L. Galloway, coauthor of We Were Soldiers Once . . . and Young

“Rick Atkinson combines meticulous research and attention to detail with an extraordinary ability to tell a story. It is a rich and powerful narrative which is certain to become a classic.”
—Ronald Spector, author of At War at Sea and Eagle against the Sun

“An Army at Dawn may be the best World War II narrative since Cornelius Ryan’s classics, The Longest Day and A Bridge Too Far.”
—Wall Street Journal

“Atkinson’s book puts him on the fast track toward becoming one of our most ambitious and distinguished military chroniclers.”
—Alan Prince, Army veteran and lecturer at the Univ. of Miami

“Atkinson tells a fascinating story of the North African campaign that is hard to stop reading . . . the perfect combination of biographical information and tactical considerations, and eyewitness accounts give readers an idea of what the average soldier must have endured.
—Library Journal 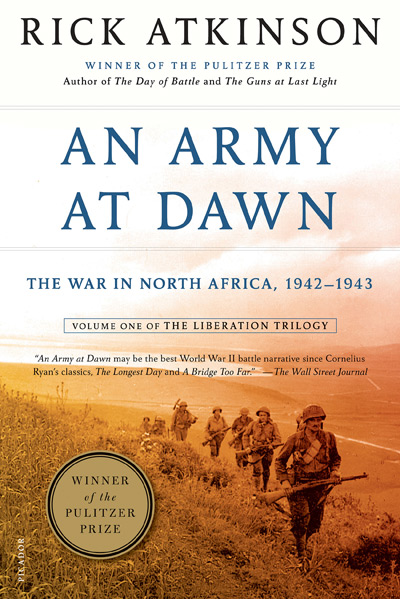 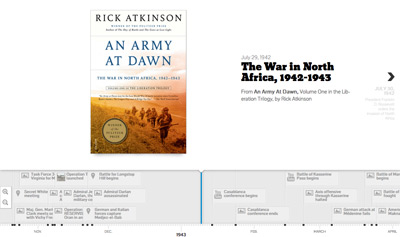