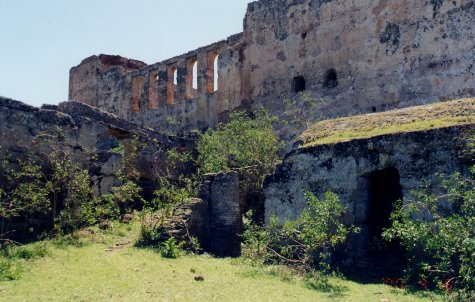 Inside the walls of the “Kasbah,” the old Portugese fort overlooking the mouth of the Sebou River in Mehdia, Morocco, where French troops fought the Americans for three days in November 1942. “The final assault,” an Army account acknowledged, “had touches of Beau Geste.” (Chapter 3) 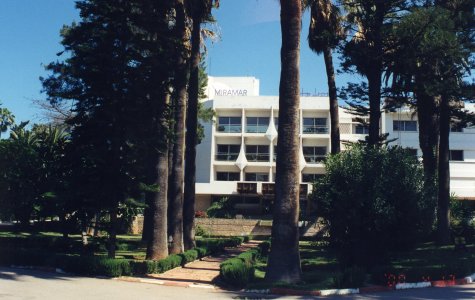 Main entrance of the Hotel Miramar in Fedala, Morocco, where Patton made his first headquarters in November 1942. “Blackout drapes covered the tall windows of the Miramar’s dining room . . . Patton and two dozen staff officers dined on duck, very credibly prepared by a French chef who had been informally conscripted into the American Army hours before.” (Chapter 3) 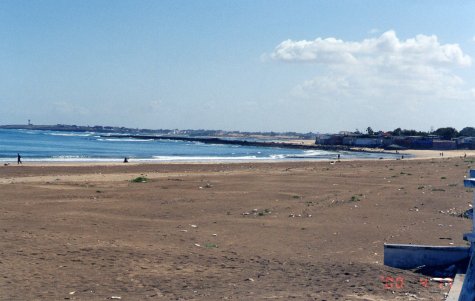 Looking north toward Cherqui from one of the beaches in Fedala, Morocco, where Americans landed on November 8, 1942. (Chapters 2,3) 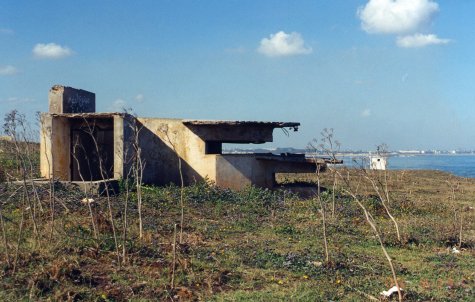 Remains of French coastal bunker at Cherqui, Morocco, with Fedala in the background. (Chapters 2,3) 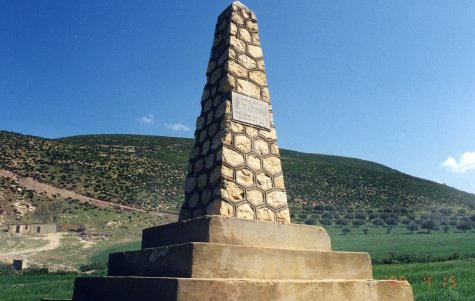 Monument erected by the British at Green Hill in northern Tunisia, where German troops at Jefna stopped the British advance in November 1942. Bald Hill is out of the picture to the right. “British scouts spied a few figers in field gray scurry into foxholes. The hills ‘seemed no more menacing than those previously passed that day,’ a British soldier wrote.” (Chapter 5) 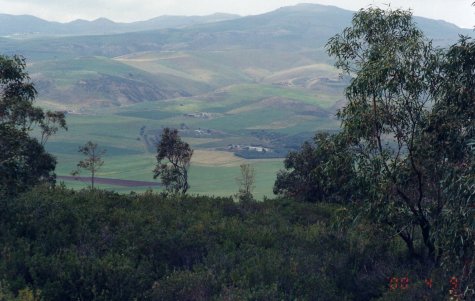 The view from atop Longstop Hill in northern Tunisia, looking west where British and American troops staged before their unsuccessful assault just before Christmas, 1942. “Longstop offered omniscience. From its crest, nothing in the Medjerda valley could move undetected — not a rabbit, not a man, certainly not a tank.” (Chapter 6) 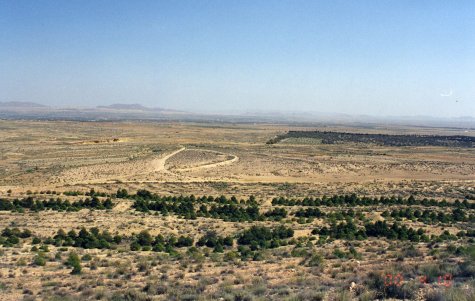 The view from Djebel Lessouda in central Tunisia, looking east toward Faid Pass and the Eastern Dorsal. Not far from where this photo was taken, Lt. Col. John Waters was captured in the early hours of the battle later known as Kasserine Pass, and Lt. Col. Robert R. Moore led part of his battalion to safety. “Lessouda was so steep, with such a commanding vista of the dun world below, that Americans had been bewitched by an an illusion of security.” (Chapter 9) 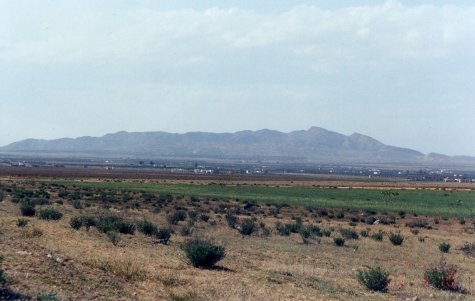 Djebel Lessouda in the north, as viewed from the onion field near Sidi bou Zid where Lt. Col. James D. Alger’s battalion was destroyed on Feb. 14, 1943. Of fifty-two American tanks in this fight, the battalion diary recorded, “None returned.” (Chapter 9) 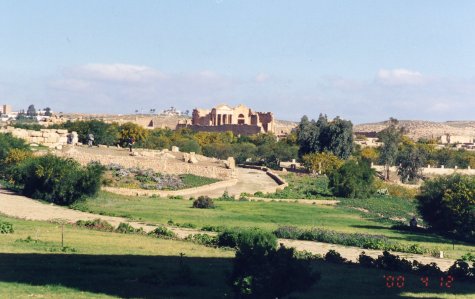 Roman ruins on the western edge of Sbeitla, gateway to Kasserine Pass. “Not since AD 647, when the caliph’s soldiers burned Sbeitla and put its Byzantine inhabitants to the sword, had the little town suffered a night like that of Feb. 16-17, 1943 . . . Only the Roman temples and St. Jucundus’ crypt, ruins already, escaped destruction.” (Chapter 9) 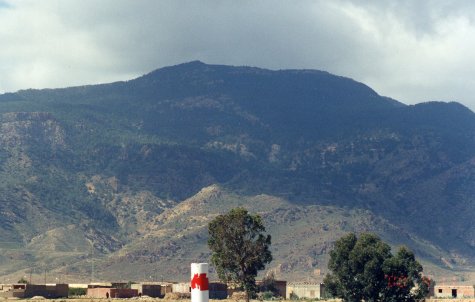 Djebel Chambi as viewed from the Hatab River in Kasserine Pass. “Two formidable sentinels stand on the pass’s flanks. Djebel Chambi on the south is Tunisia’s tallest mountain at 5,064 feet, a forbidding massif that is thickly wooded almost to the crest.” (Chapter 9)

Djebel Semmama, the northern bracket of Kasserine Pass. On the night of February 19, 1943, “German infiltrators cut off the solitary company on the slopes of Djebel Semmama, then seized Point 1191, the mountain’s most important feature.” (Chapter 9) 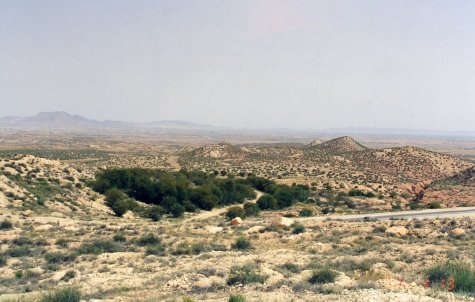 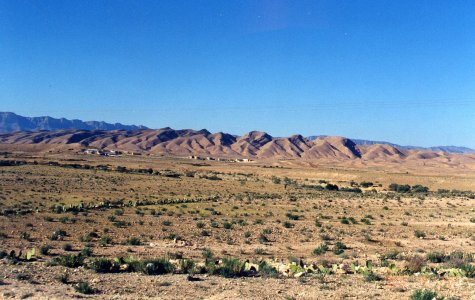 Southeast of El Guettar, looking north from Highway 15 — the Gabes road — across the open terrain where Benson Force fought Afrika Korps grenadiers and the 21st Panzer Division in late March 1943. “Trying to chivvy the enemy from their works, Benson warned, was ‘like digging potatoes.'” (Chapter 11) 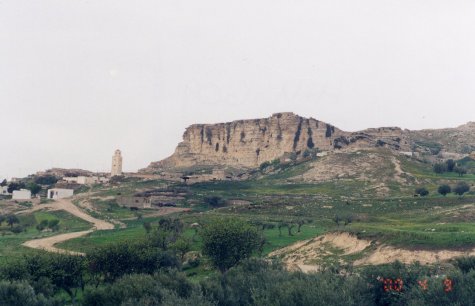 Hill 609, as American soldiers of the 34th Division approaching from the west would have seen it in late April 1943. “Except for a small olive grove 500 yards from the southern slope, the terrain offered little cover to attackers, while the limestone palisades provided countless knobs and crevices to hide defenders.” (Chapter 11) 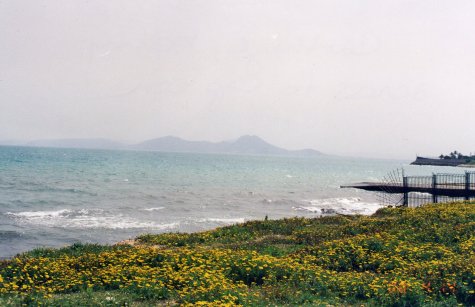 Looking across the Gulf of Tunis from Carthage, toward Cap Bon. Near this spot the Italian freighter Loyd Triestino, packed with nearly 500 American and British prisoners, was repeatedly attacked by unwitting Allied planes. “The terrified prisoners cowered in the dank hold as near misses opened seams in the hull and cannon fire riddled the upper decks.” (Chapter 12)