“WE’VE GOT TO GO TO EUROPE AND FIGHT”

The Origins of Operation OVERLORD
by Joseph Balkoski

The long and lamentable history of war yields a universal truth: the life-or-death fates of thousands of young men engaged in human conflict are inevitably determined by just a few much older men. At 5:30 PM on Monday, August 23, 1943, two of the most famous old men in the world, sixty-eight-year-old Winston Churchill and sixty-one-year-old Franklin D. Roosevelt, faced each other across a table at the Governor-General’s summer residence in Quebec to determine the fates of not thousands, but millions of American and European youths. A British brigadier opened the meeting by reading a draft plan drawn up by the Anglo-American high command, more old men who for ten days had hammered out strategy in the Salon Rose, a cerise-colored drawing room on the second floor of Quebec’s renowned Château Frontenac, offering a stunning vista of the St. Lawrence River through five windows in a corner turret. Item 11, classified as Operation OVERLORD, drew rapt attention: “This operation will be the primary U.S.-British ground and air effort against the Axis in Europe,” the brigadier intoned. “Target date: May 1, 1944. After securing adequate Channel ports, exploitation will be directed toward securing areas that will facilitate both ground and air operations against the enemy. Following the establishment of strong Allied forces in France, operations designed to strike at the heart of Germany and to destroy her military forces will be undertaken.” 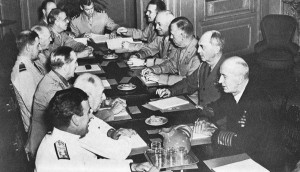 The American and British chiefs of staff meet in the Salon Rose of Quebec’s Chateau Frontenac in August 1943. Seated on the British (left) side of the table are Vice Admiral Mountbatten (closest to the camera), Admiral of the Fleet Pound, General Brooke, Air Chief Marshal Portal, Field Marshal Dill, Lieutenant General Ismay, and Brigadier Redman (hidden). Seated at the head of the table taking notes is the U.S. Navy’s Commander Coleridge. Seated on the American (right) side of the table are Admiral King (closest to the camera), Admiral Leahy, General Marshall, General Arnold, and Brigadier General Deane. (U.S. Army Signal Corps.)

And so it began. But reaching that point had not been easy; for two years the old men had heatedly danced around the issue of Nazi Germany’s downfall. Eager American planners, exemplified by an obscure brigadier named Dwight Eisenhower—“We’ve got to go to Europe and fight,” Ike had avowed in early 1942—clashed with much more experienced but cautious Britons, who emphasized strategic air bombardment of Germany and Mediterranean options rather than the highly risky cross-Channel assault against Nazi-occupied France favored by their junior partners. For the first eighteen months of their direct involvement in the war, the Americans had unenthusiastically yielded to the British vision, agreeing not only to Churchill’s pet plan, the invasion of North Africa in November 1942, but also to the assault on Sicily eight months later. Only at the January 1943 Casablanca conference did the Anglo-American military chiefs agree—almost as an afterthought—to establish a planning staff in Britain to study the issues involved in a cross-Channel invasion. Two months later they appointed General Frederick Morgan of the British Army to lead that staff, granting him the title of “Chief of Staff to the Supreme Allied Commander” (COSSAC)—a curious label since no supreme commander then existed.

COSSAC’s staff—half British, half American—would hastily concoct the plan known as OVERLORD and in July 1943 disseminate its “Most Secret” contents to Churchill, Roosevelt, and their military chiefs. One month later, at Quebec’s Citadel, they accepted Morgan’s scheme as the Allies’ foremost operation for 1944, although this time the British lacked enthusiasm. As soon as the British brigadier finished reading Morgan’s draft plan at the August 23 meeting, Churchill took the floor and announced passionately that he “wished it definitely understood that British acceptance of the planning for Operation Overlord included the proviso that the operation could only be carried out in the event that certain conditions regarding German strength were met.”

Nevertheless, the seed for the D-Day invasion had been planted; the assault on Normandy would take place in less than ten months—the ghosts of Gallipoli be damned. All agreed that OVERLORD would be the essential Allied operation of World War II; the plan books that harried staff officers would soon prepare, as thick as Manhattan telephone directories, proved it.

The young men hoped that this time, God willing, the old men knew what they were doing. 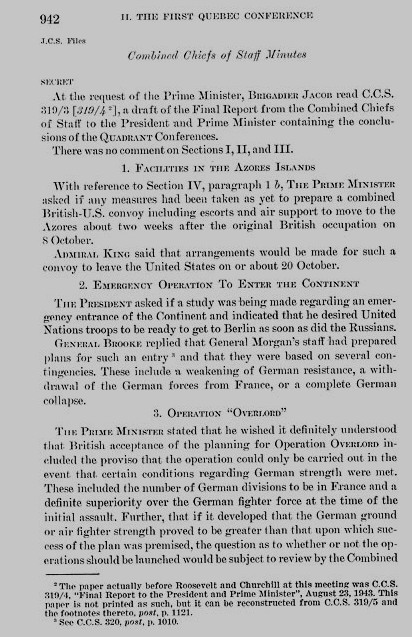 A page from the transcript of the late afternoon meeting on Monday, August 23, 1943, attended by President Roosevelt, Prime Minister Churchill, and their senior military advisers, at the Governor-General’s summer residence within Quebec’s Citadel. Churchill’s comment with regard to Operation OVERLORD can be seen at the bottom of the page. (Foreign Relations of the U.S.)