“A BODYGUARD OF LIES”

By the third day of the Teheran summit, code-named EUREKA, that trinity of statesmen known in the Western press as “The Big Three”—Churchill, Roosevelt, and Stalin—finally began to relax. Just a few years in the past, one could hardly have envisioned FDR, a Hyde Park aristocrat, or Churchill, an old-school imperialist, bantering with Stalin, whom George Marshall described as “a rough son-of-a-bitch who made his way by murder and everything else.” But at four P.M. on November 30, 1943, near the close of their third plenary meeting, Churchill brought up the pressing need to deceive the Germans about the imminent D-Day invasion. According to the transcript, “The prime minister observed that truth deserves a bodyguard of lies.” Rejoined Stalin: “This is what we call ‘military cunning.’” An amused Churchill concluded that “he considered it, rather, ‘military diplomacy.’”

By the close of 1943, astute German intelligence officers could hardly miss the Allies’ military buildup in England; that Anglo-American troops would soon storm the Atlantic Wall was obvious. As the historian Michael Howard wrote, “For the past six months [the Allies] had been trying to persuade the Germans that they faced a major invasion threat from the United Kingdom, when in fact they did not. Now they had to persuade them that they did not face such a threat, whereas in fact they did.” Operation FORTITUDE, which Howard depicted as “perhaps the most complex and successful deception operation in the entire history of war,” strove to keep enemy generals guessing, both before and after the invasion, about the Allies’ intent. 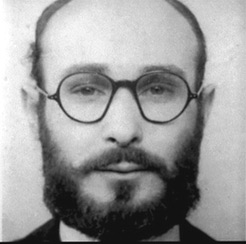 Juan Pujol, the thirty-two-year-old Catalan chicken farmer who, as Agent Garbo for British intelligence, helped fool the Germans about the time and location of the D-Day invasion. (UK National Archives)

FORTITUDE’s core hoax consisted of First U.S. Army Group (FUSAG), an imaginary command led by a real person of whom the Germans took earnest notice, George Patton. Waves of meaningless radio transmissions emanating in southeast England and pastures full of dummy equipment aimed to convince the snooping enemy that the invasion would be launched by Patton’s phantom command not against Normandy but at the Pas de Calais. Even after Montgomery’s Twenty-first Army Group executed the Normandy invasion in June, the FUSAG subterfuge would persist for weeks, hinting to the perplexed enemy that the Normandy landing might have been a diversion intending to draw German focus away from a larger assault that would soon surge across the Strait of Dover.

One of the most skilled practitioners of the “bodyguard of lies” turned out to be a Catalan chicken farmer, thirty-two-year-old Juan Pujol, known to British intelligence as Agent Garbo. For years Pujol had cleverly duped the Germans into believing he was working for them as Agent Arabel, but in truth, as his British handler noted, “By summer 1942 we had, through Garbo, begun to swamp the Germans with information, misinformation, and problems.” By 1944, from a modest house at 35 Crespigny Road in London, a few miles north of Hyde Park, Pujol was regularly feeding the enemy misinformation by radio based on fanciful reports from a network of spies that was entirely made up. The Normandy invasion, Pujol claimed to the Germans, was just the first of many Allied seaborne assaults; units in southeast England waiting to launch a second invasion under Patton, he avowed, included the American 21st Airborne Division and 59th Infantry Division, which did not exist. The FUSAG invasion, Pujol insisted, “could come at any moment.” The Germans bought it so thoroughly that on July 29, 1944, when the Allies had just begun their Normandy breakthrough and Patton was about to execute his magnificent breakout, the Germans awarded Pujol in absentia the exalted Iron Cross “for extraordinary merit.”

Operation FORTITUDE, however, did not trigger within the German high command an undivided conviction that the Allied invasion would come in the Pas de Calais. On June 5, 1944, the day before D-Day, a German intelligence brief revealed that the enemy was still thoroughly in doubt about the invasion’s location: “The main front between the Scheldt [Estuary, in Holland] and Normandy is still the most probable place of attack.”

If at that late date the enemy still was guessing, FORTITUDE, although not perfect, had certainly been good enough. 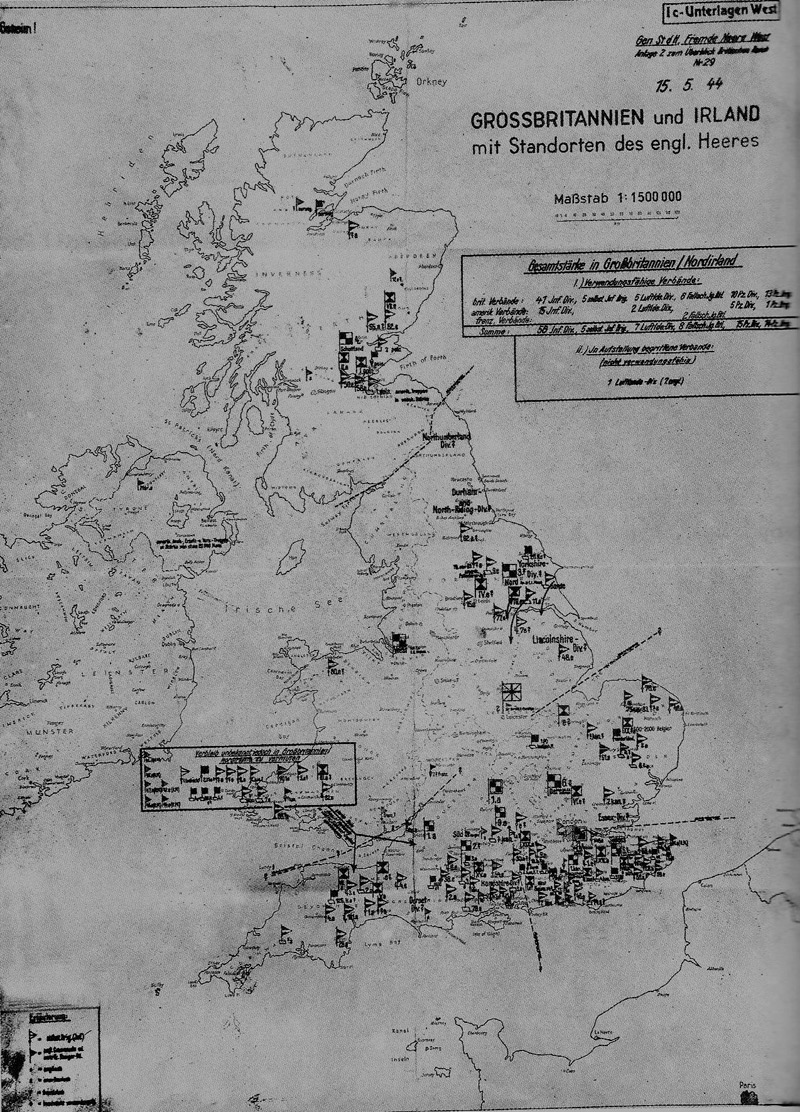 A German map depicting an intelligence estimate of Allied forces in Britain as of May 15, 1944. Note the heavy concentration of Allied divisions in southeast England. Many of those units did not exist. (UK National Archives)