Author Interview with Rick Atkinson regarding In the Company of Soldiers

There have been other books published on the war in Iraq. What makes this one different?

I believe this book is not, fundamentally, about the war in Iraq. It’s about the anxieties and joys of command; about men—and now women—in combat; about the curious culture of our Army; about leadership, good and bad; about our military in an age when wars are small, expeditionary, and bottomless. It draws on a lifetime of familiarity with soldiers and their world.

How did soldiers react to embedded reporters?

From private to senior general, they were welcoming and gracious. Many soldiers saw reporters as a link back home, the conduit through which their stories could be told. Most also seemed appreciative that reporters were sharing the danger and the misery. Obviously it could be disconcerting to have a reporter watching every move and listening to every word—one brigade commander in jest started to unholster his pistol in response to something I’d written. At least I think it was in jest.

As war drew closer, access in the 101st command post increased to the point that it was nearly total. I’ve been around the Army all my life—my father was an infantry officer, and I grew up on military posts—but the intimacy of this view was unique. I was given a pass that authorized “secret-level access to all 101st Division activities. This includes, but is not limited to, planning, operations, and briefings.” In Iraq, the division’s commanding general kept me at his elbow virtually all day, every day.

Major General David H. Petraeus, commanding general of the 101st Airborne Division, was pivotal to your experience in Iraq and is the central figure to In the Company of Soldiers. Tell us about him.

Dave Petraeus is among the Army’s most talented, intriguing, and intense senior officers. He’s the son of a Dutch sea captain who took refuge in New York at the beginning of World War II, and then was skipper of a Liberty ship during the war. Young Petraeus grew up in Cornwall, New York, in the Hudson River valley, and graduated from West Point in 1974. Among his achievements: he married the superintendent’s daughter at West Point; he has a Ph.D. from Princeton; he served as an aide to several of the Army’s most senior four-star generals; he survived an M-16 gunshot wound to the chest during a training accident; he survived the collapse of his parachute in a skydiving accident. Despite tours in Haiti and Bosnia, he had never served in combat before the Iraq war, and suddenly found himself responsible for the lives of 17,000 soldiers.

Publicly, he was cautious and private, and his formal statements to reporters or television cameras had a stilted, calculated timbre. Off-stage, he could be tart, funny, occasionally cynical, and self-deprecating, as when he quoted his mother as saying of his thin frame, “No self-respecting chicken would look like you.” I think he enjoyed talking to someone like me who was outside the chain of command. While we were still in Kuwait, he began asking me a rhetorical question that became private joke between us: “Tell me how this ends.”

How is the 101st Airborne Division different than other divisions?

The 101st is unique not only among the ten U.S. Army divisions, but among all the world’s armies in that its soldiers travel to battle in helicopters. The division has about 260 helicopters of various flavors, including far more Apache attack helicopters than any other division. The division has a remarkable heritage, stretching back to the invasion of Normandy sixty years ago.

How much combat did the 101st see? How close were you to the action?

The 101st had sharp fights in three Shiite cities—Najaf, Karbala, and Hilla—and I witnessed each of those in detail, thanks to Gen. Petraeus’s penchant for loitering in the front lines. He got close enough to have Iraqi machine gun fire stitch the ground next to our Humvee and, on one occasion, to have a U.S. Air Force bomb detonate behind us. There were other harrowing moments, including the helicopter flight into Iraq from Kuwait during the beginning of a monstrous sandstorm.

You were in Iraq when you won the Pulitzer Prize for history for your last book, An Army at Dawn. What was that like?

Thrilling, of course, although also rather surreal. I got the word in a satellite telephone call at midnight, in a remote, primitive desert encampment between the cities of Najaf and Karbala. Everyone else was asleep. The next day I spent in Karbala with the 101st Airborne, watching an intense firefight and writing a long story about it for the Post. That seemed appropriate, somehow. It’s always best to just get on with your work.

How is In the Company of Soldiers different from your previous books? Why write this in first person?

This is a battlefield narrative that is told largely on the basis of what I saw, heard, smelled, tasted, and felt. Although I had access to many documents, some of which still are not available to the public, there’s an immediacy to this account that’s obviously different than, say, writing about events that occurred in North Africa sixty years ago, as I do in An Army at Dawn. This book bears witness, and therefore first person seemed both appropriate and necessary.

How do you think the members of the 101st will react to your portrayal of them?

I like to think they’ll see it as an unvarnished tribute to their competence, their professionalism, and their sacrifices, individually and collectively. I also like to think that for them it will ring true, in very fundamental ways. They also will recognize, hopefully, that while I personally have doubts about the wisdom of a unilateral attack on Iraq, the book does not confuse the warriors with the war.

Did you learn anything surprising about the life of a soldier while you were there?

Even for someone who has been around the Army as much as I have, soldiers never fail to surprise, amuse, and occasionally perplex. I was struck by how many of them felt, viscerally, that the Iraq war was only a campaign in a bigger, perpetual war. They lead very peripatetic lives these days, shuttling from one brushfire war to another. And they’re wonderfully diverse in their interests and passions: the private first class in the cot next to me at Camp New Jersey one morning put Mozart’s Piano Concerto No. 21 in C Major on his boom box, then pulled out his brushes and paints to do a water color.

What is next for you?

I’m back where I started before leaving Fort Campbell, Kentucky, for Kuwait with the 101st last February: working on volume 2 of my Liberation Trilogy, which will cover the campaigns in Sicily and Italy in 1943-1944. There’s an enormous amount of research left to do, but in a curious way the Army fighting its way up the boot of Italy seems remarkably familiar to anyone who has been with the Army in Iraq. I’m also going to do a bit of teaching, as the General Omar N. Bradley Chair of Strategic Leadership at the Army War College and Dickinson College. 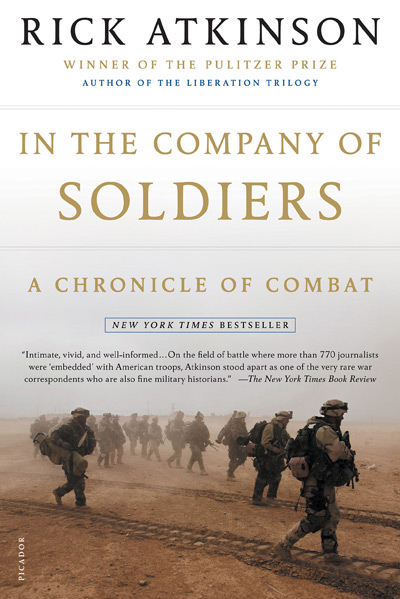